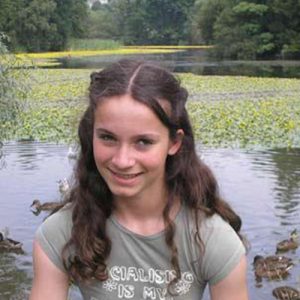 Eilidh was 14 when she collapsed on a school trip in February 2009. A scan showed she had a tumour the size of a melon which was promptly removed along with her left ovary. Tests showed the tumour was malignant and that she also had a form of Turners Syndrome, a chromosomal disorder which occurs in 1 out of 2000 girls and is likely to have made her predisposed to Germ Cell Cancer in her ovaries.

Throughout the year, Eilidh endured several major surgeries to remove various tumours as well countless hours of chemotherapy and radiotherapy. Sadly, Eilidh passed away on 25th March 2010 after a 14 month battle with the disease, 9 days short of her 16th birthday.

Her family said, “She showed tremendous bravery and wisdom throughout her ordeal and inspired everyone who came into contact with her. Eilidh was the most extraordinary, loving, sweet, faithful and brave young girl, who always thought of others before herself.”

Needless to say, the effects of cancer had a devastating impact on Eilidh and the family and they resolved that whatever the outcome, they wanted somehow to help others and make sure that Eilidh’s legacy would continue. To this end her family set up the Eilidh Brown Memorial Fund through which they are continuing to raise funds.

Eilidh received a Cancer Research UK, ‘Little Star Award’ in August 2010, nearly 5 months after she passed away for the courage she showed in fighting cancer. It was her best friend Meghan who nominated her for the award.

Watch the video about Eilidh and her dream…

Learn more about the plans
Scroll to top